BLOODBASTARD – Next To Dissect (Import Version)

Original import release version on Srotum Jus Records (Singapore) back in stock and last copies!
Intense and aggressive mix of Death/Hardcore/Grind with Horror/Gore lyrics influenced by the likes of Bile,Carcass,Mortician,Inhume.
9 tracks

In the winter of 2002 a new metal band was born
from the ashes of ‘Lost Euphoria’ (doom metal).
Sander B., Patrick and Sander V. continued and started playing an intense and aggressive mix of death/hardcore/grind with horror/gore lyrics and without any fancy nonsense.
The rehearsal-shed was built in the area where a local tragedy took place between 1835 and 1847. Several dreadful murders were committed by a poet-worker and three of his sons known as ‘the Bloodbastards’….

Bloodbastard rises from the dead again!

No bullshit, pure and from the heart!
Aggressive and intense vocals meet powerful, down-tuned and catchy riffs with pounding drumming. Bloodbastard plays bloodsoaked death/hardcore/grind songs which will stay on your mind forever! 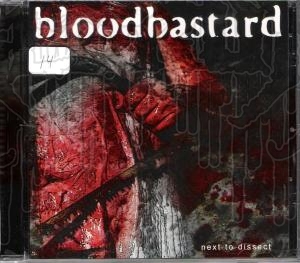 You're viewing: BLOODBASTARD – Next To Dissect (Import Version) $12.00
Add to cart
We use cookies to ensure that we give you the best experience on our website. If you continue to use this site you agree to the use of cookies and our terms of service.OK