Their debut album gets it’s official U.S. release with bonus tracks from their “Full Body Mutilation” 2004 demo. Intense and aggressive mix of Death/Hardcore/Grind with Horror/Gore lyrics influenced by the likes of Bile,Carcass,Mortician,Inhume!
12 tracks total

In the winter of 2002 a new metal band was born
from the ashes of ‘Lost Euphoria’ (doom metal).
Sander B., Patrick and Sander V. continued and started playing an intense and aggressive mix of death/hardcore/grind with horror/gore lyrics and without any fancy nonsense.
The rehearsal-shed was built in the area where a local tragedy took place between 1835 and 1847. Several dreadful murders were committed by a poet-worker and three of his sons known as ‘the Bloodbastards’….

Bloodbastard rises from the dead again!

No bullshit, pure and from the heart!
Aggressive and intense vocals meet powerful, down-tuned and catchy riffs with pounding drumming. Bloodbastard plays bloodsoaked death/hardcore/grind songs which will stay on your mind forever! 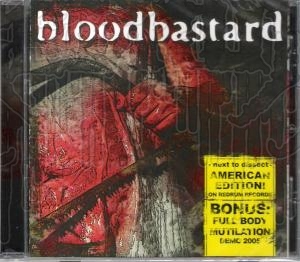 You're viewing: BLOODBASTARD – Next To Dissect (U.S.Version With Bonus Tracks) $8.00
Add to cart