Much like they’ve done with ARMOUR and EVILNIGHT, once again, HELLS HEADBANGERS unleashes an underground gem from darkest Finland, ready to take up the heavy metal fight: BONEHUNTER and their debut album, Evil Triumphs Again. All too appropriately titled, Evil Triumphs Again is a cryogenically frozen blast from the past, offering obeisance to debut-era Bathory in its unremittingly cavernous atmosphere yet resolutely punk-rocking thrust. BONEHUNTER hail all forms of evil (a quick rundown of some of the album’s song titles include “Acid Fuck,” “Succubus,” “Burning Skulls,” the telltale “Devil Metal Punks” and, of course, the title track itself) and extol these virtues through simple, pounding metalpunk drenched in sulfur and sewage, each anthem crankier and catchier than the last. One listen through and these songs will NOT leave your head – and thus, Evil Triumphs Again!
9 tracks 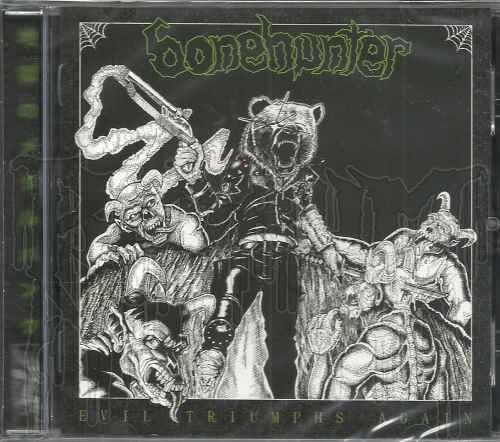