VHS return to Horror Pain Gore Death Productions with their third album “We’re Gonna Need Some Bigger Riffs”! With tongue still firmly planted in cheek, this Canadian trio is exploring the murky depths with their latest release. Sea monsters, killer whales, and bloodthirsty creatures make up the majority of the lyrical content, while the usual killer in a mask makes a brief appearance, which should be expected of any sequel! VHS stay true to their diverse and catchy style, taking elements from Death Metal, Punk and even Hair Metal throughout the albums 14 tracks. For fans of Exhumed, Impetigo, Autopsy and Macabre

Trevor Strnad of The Black Dahlia Murder lends his snarl to the midtempo “Rooting For the Villian” , while Matt Harvey of Exhumed adds an extra layer of sickness to the rocking nod to Humanoids from the Deep, “Death And Carnage Coming In Waves” 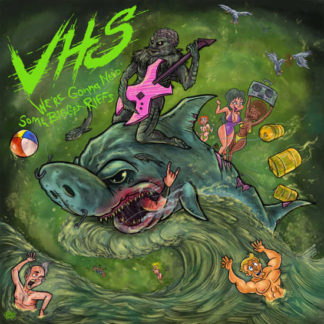