1987, Los Angeles Death Metal at its rawest and darkest stage! MAJESTY was one of the earliest bands to feature Oscar Garcia(Terrorizer, Nausea), Carlos “Cosmo” Reveles (Terrorizer, Nausea) and Eric Castro (Nausea), basically it was the embryonic nightmare of what later bursted into LA’s most feared Grindcore unit: NAUSEA. Their cult demo tape “Bestial Vomit” was hunted as a rare treasure among collectors and tape trading maniacs. Here you finally get it mastered from a copy coming directly from the band’s archives, with the addition of another session recorded few months later and posthumously considered their Demo #2 (by now only circulated via bad quality bootlegs). And there’s more : a jam session featuring Majesty and Terrorizer together playing a Napalm Death cover + 1 extra track.
12 tracks total 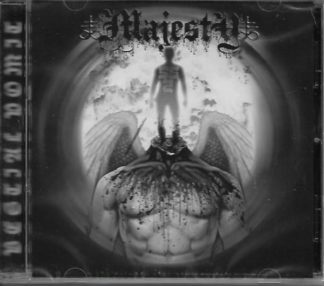 You're viewing: MAJESTY – Bestial Vomit + Demo II $10.00
Add to cart
We use cookies to ensure that we give you the best experience on our website. If you continue to use this site you agree to the use of cookies and our terms of service.OK